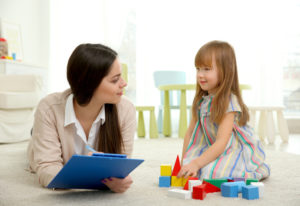 Understanding the role of a functional behavioral assessment in applied behavior analysis therapy starts by learning some individual definitions. In an ABA context, these terms have very specific meanings:

A functional behavioral assessment seeks to determine what children are trying to accomplish by taking certain actions. In short: why they do what they do. Performing this assessment can be foundational to successful ABA treatment.

Children, even those on the autism spectrum, tend to have relatively simple motivations for their actions. Current ABA theory outlines four general categories. These functions of behavior can be applied to any action a child takes:

Some actions are relatively straightforward — self-stimulation behaviors, such as flapping, for example. These behaviors typically fill a primary need for stimulation and, secondarily, may perform other functions if certain reinforcement patterns are set.

The functions of other actions are not so transparent and therefore require a more focused observation. This functional opacity is one of the core reasons for the importance of functional behavioral assessments in ABA therapy.

Understanding the function behind a particular behavior is essential for substitution techniques. These strategies replace problem behaviors with more desirable alternatives that fulfill the same functions.

For example, therapists might seek to replace the behavior of jumping up and down with the behavior of raising one’s hand. Both of these actions serve to gain attention. As long as the function is consistently fulfilled, the child is likely to accept the more acceptable, less disruptive behavior.

As mentioned above, behaviors that start out with a single function may develop other, secondary functions after repeated reinforcement. For example, if a child performs a problem behavior to gain attention, and is subsequently provided an iPad to curb the behavior, it is likely the secondary function of obtaining the tangible iPad will become associated with behavior, additional to the attention-seeking function. The functional behavioral assessment in ABA therapy helps avoid these types of complications.

To summarize: By correctly identifying the purposes behind children’s actions ABA, therapists can replace problem behavior with desirable behavior and avoid complicating matters further by providing inappropriate reinforcement. Functional behavior assessments are the key element towards both of these important treatment goals.